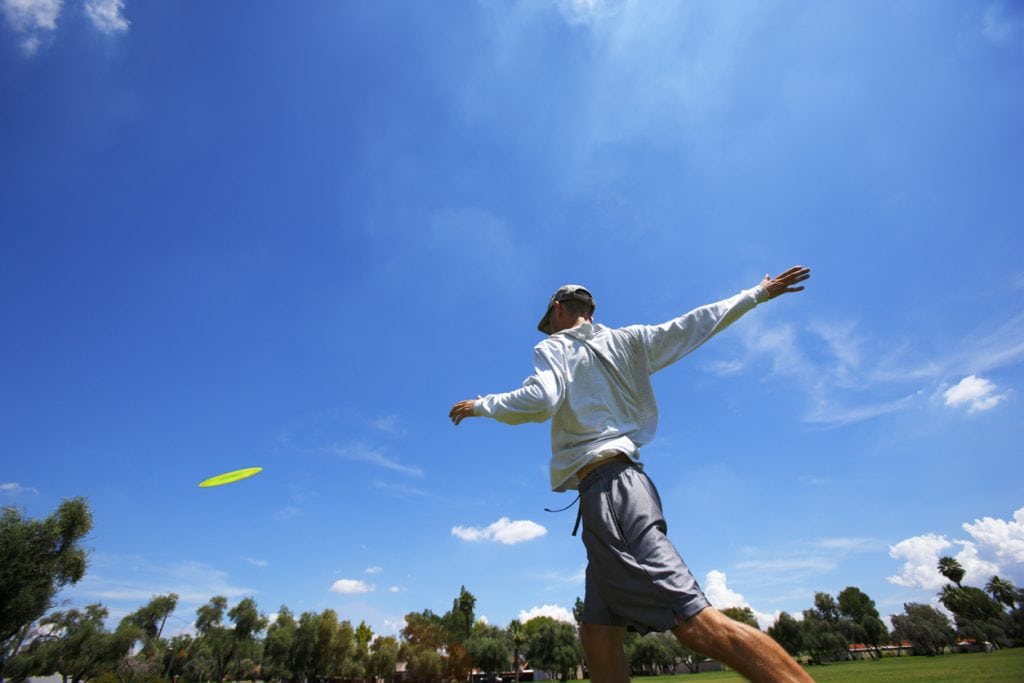 3 Ways to Have Straighter Drives on Your Next Round

I want to share with you 3 Ways to Have Straighter Drives on Your Next Round. Picture this with me and see if it sounds at all familiar to a hole that you’ve played recently. You’re standing on the tee box and can see the basket straight ahead of you. There isn’t a single obstacle between you and those slightly rusty chains. You think to yourself, “All I have to do is throw this driver straight at the basket and I’m the new mayor of birdie town.” You look to your left and your stomach drops. To the uninitiated, they might say that there is a small pond to the left of the fairway.

Somehow that “small pond” looks more like a giant open mouth that’s just waiting to eat your disc. Then you look to the right. The innocent trail walker in the park might say that there is a small grove of beautiful native trees. However, you have been battle-hardened and know from experience that those guardian trees are all calling dibs on which one gets to put a deep gash in the rim of your driver. Neither of those hazards are actually between you and the basket…so why do they loom so largely in your mind’s eye?

The shortest distance between two points is a straight line

We have all heard the old adage that “the shortest distance between two points is a straight line.” This seems fairly common sense, but if you love disc golf as much as I do, you start to see disc golf applications to everyday things all around you. I am not making the argument that you should only try to throw straight shots. However, if you find your drives traveling further left and right than they do forward, keep reading! Throwing your drives straighter will not only provide you with tools to score lower, it can also improve the longevity of your discs!

I’m not sure about you, but usually when I throw my disc squarely into a tree or that giant pond adds my disc to its inventory, it’s usually not because I threw my drive straight! Avoiding these hazards can help you keep your discs in better shape for a longer time. This allows you to become more comfortable throwing a disc you’re familiar with instead of having to get replacements more frequently. Many courses are intentionally designed to not only reward good drives but to punish bad drives. The best way to give yourself a clear up-shot to the basket is to land in the fairway off the tee. This is such an important principle in disc golf.

You will notice most pros that you watch in tournament coverage employ the following strategies in order to land in the fairway and avoid OB. Throwing more accurately, even if it means you throw a shorter distance off the tee, will sometimes add a stroke to your hole. Throwing out of bounds will always add a stroke to your hole. To show some real-life examples of this, let’s look at the Silver Cup event from the Disc Golf Pro Tour (DGPT) that was played recently. The top half of the field averaged more than 50% less OB strokes than the bottom half of the field. That’s a huge difference, even when comparing pros to other pros!

Some of you may have heard of Paul McBeth (the #1 disc golfer in the world for the past few years). For the 2020 season, Paul is only ranked 25th overall in circle 1 putting, but he is ranked 1st in both fairways hit and greens in regulation. This shows the importance of following these steps to increase the accuracy of your drives in order to optimize your game!

We now know that throwing your drives straighter is important to improve your game but how can you do it? The first tip to throwing straighter drives is throwing your drive with less height. The shape and mechanics of a disc make its ideal flight path look much different from other thrown objects like a football or baseball. People much smarter than myself have researched and discovered that the ideal angle of attack of a flying disc is 12-15 degrees above horizontal. That’s not very high if you think about it.

I would encourage you to go to a field or other open space and throw some drives at different heights. You will notice that the higher in the air you throw your drive, the further left or right it will end up. Another way to illustrate this is to roll a ball up a very shallow hill. It will travel in a mostly straight line until it slows down enough to curve left or right. Rolling the same ball up a steeper hill with the same power will have very different results. The ball will not make it nearly as far before it loses its forward momentum and finds itself wandering sharply left or right. Sound familiar to how some of your drives look?

While on this topic, it is important to differentiate between throwing at too high of an angle and throwing the disc nose up. Here, I am speaking mainly of throwing at too high of an angle. Both of these two errors will decrease your distances and your accuracy. Throwing nose up, however, is much more difficult to address, and I will be writing more on this topic at a later date.

The second strategy to throw your drives straighter is to choose a less stable disc. Now in order to this, we must first talk about what stability is. The stability of a disc is how strongly it will fight to fly in a specific flight path. For a right-handed backhand (RHBH) throw, a highly stable disc will finish strongly left. For a left-handed backhand (LHBH), a highly stable disc will finish strongly to the right. The folks over at Best Disc Golf Discs have some great articles and YouTube videos specifically talking about stability. You can check them out at: https://www.bestdiscgolfdiscs.com/overstable-understable-discs-how-to-choose-turn-rating/.

Without getting too bogged down in the details, throwing a less stable disc will allow players with slower arm speeds to get much straighter and further flights before the disc begins to finish left or right. If you’re looking at the flight numbers of a disc, the stability will be most highly influenced by the last 2 numbers: the turn and the fade. For a RHBH throw, the turn indicates how far to the right the disc will travel during the first portion of its flight path. The fade tells you how sharply to the left the disc will finish during its final descent and subsequent ground action.

If you have become accustomed to the feel and enjoy the rim width of a certain speed of disc, then choosing a similar speed disc with less stability might be your best way to see straighter drives right away.

I can already hear your first thought when you saw this heading. “What do you mean lower speed…I DO CROSSFIT…no disc is too high speed for me!!” I would encourage you to ask yourself which you prefer – to continue to throw your Innova Destroyer or your Discraft Zues into the hazards to the left or right of each hole? Or to reach for a fairway driver and easily find your disc resting in the middle of a well-manicured and seldom traveled fairway? If that second option sounds better to you, then you’re about to see some lower scores in your future!

There is a common misconception in disc golf and it’s something that plagued me for years. Many people think that the speed rating of a disc is first and foremost an indicator of how FAR the disc will go. This is not the case. This number is primarily a representation of how FAST you have to throw the disc in order for the other flight numbers to play out correctly. The best way to illustrate this is to take a putter and a driver out to an open area and throw them both with about 20% power. You will notice that they go the same distance but the driver will curve much more sharply than the putter. This is because the 20%-power throw was much further away from the target speed of the driver as opposed to the putter.

This produces a much more altered flight path compared to how it is supposed to fly.

After realizing this truth, I have noticed a large shift in the discs that I reach for on the tee box. (look for my next article on why you should stop throwing drivers off the tee). I have noticed that the highest speed disc that I can get to fly properly is between a 10 to 11 speed depending on the manufacturer. In addition to having a much truer (straighter) flight, I have also seen that throwing lower speed drivers helps to decrease how punished I am when I do throw nose up. This means that when I throw a poor shot, my “miss” is much less errant than it would have been with a higher-speed disc.

Remember that “small pond” I talked about earlier that seems more like an open mouth waiting to eat your disc? That small pond is a real place, and it’s just off the fairway on hole 17 of one of my local courses. Over the years, I have donated 3 of my drivers to the feed-the-lake program. All 3 of them have been 12 speed or higher. I would like to say that I have learned my lesson and have made my last donation, but time will tell!

Many manufactures and distributors have tools that can help you find discs that are similar in characteristic but just have changes in 1 aspect, like stability or speed. For example, on Innova’s website it shows you discs that are ranked in order of stability as well as speed.

The discs are sorted where higher speed discs are on top and the speed decreases as you move down the column. And within each row, the discs start out very stable and get less stable as you move left. Using charts like this and tools from other distributors like Infinite Discs and OTB discs can help you find just the right disc to make sure you’re throwing straighter and more accurately without having to put hours and hours of practice in.

Go throw some discs! Following these three strategies will help to straighten out your drives. However, simply reading an article never lowered someone’s score by 5 strokes. Heading to a field and practicing each of these strategies is going to be the best way for you to figure out which one, or which combination of them is going to work best for your specific game. At the end of the day, disc golf is a game and games are meant to be fun. My intention is to give you some ways to help you spend more time throwing with your friends instead of having to spend time looking for lost discs in the woods. If you found this helpful, share it with your friends and check out the other awesome content on Wild Discs!