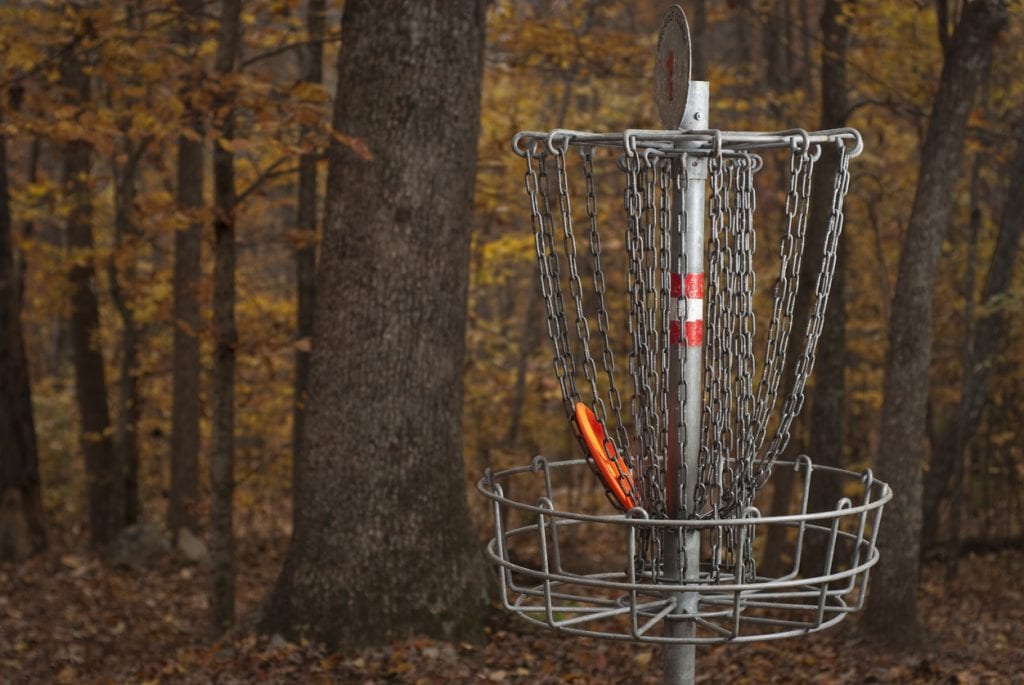 Disc golf has been around since time began in some form. Early cavemen, searching for weapons to use to kill food, probably used rocks before clubs. Killing something from a safe distance was better than using a sharp stick or club. Flat rocks flew further and had a different flight than round objects.

You can skip flat stones on water, and throwing shields are the shape of Frisbee discs. The discus indeed resembles the Frisbee. The Complete Book of Frisbee reports the earliest recorded history of disc golf dates back to 1926 in Bladworth, Saskatchewan, Canada. Ronald Gibson and his buddies on the playground at Bladworth Elementary School threw tin lids into four-foot-wide circles they drew in sandy patches of the school grounds. ‘Tin Lid Golf,’ as it was called was played on a relatively regular basis.

As they became older, they went their separate ways, and they no longer played the game. There is no historically recorded connection from 1926 Tin Lid Golf to the arrival of modern Frisbee golf, but that is not proof that there is no connection. It might have been someone from Bladworth Tin Lid Golf who moved to the United States and began throwing pie tins at Ivy League universities such as Yale.

Kevin Donnelly and George Sappenfield were early coordinators of the game. They, with the help of Wham-O, spread the sport to California cities. In 1959, Donnelly played a form of Frisbee golf called Street Frisbee Golf. He became a recreation leader and supervisor of Newport Beach, California. In 1961, he formulated and organized Frisbee golf tournaments for kids who played on nine playgrounds of the city he supervised.

By 1965, Wham-O sponsored a fully documented, citywide Frisbee tournament. It was highly publicized. Hula hoops were used as holes. There were published rules, pars, hole lengths, and prizes. The inventor of the Frisbee, Frederick Morrison, attended the event.

Like ultimate Frisbee, nobody invented disc golf. It evolved from ball-minded athletes who slightly altered the rules and play of similar sports where a flying disc replaced a ball. The Berkeley Group and Victor Malafronte established an 18-hole course on the California UC Berkeley campus in 1970. Learn more here!

In that same year, Ken Westerfield and Jim Kenner (Discraft) designed and played a Frisbee golf course in Queen’s Park, Toronto, Canada. Despite never hearing of the International Frisbee Association or seeing a copy of the association’s newsletter, a small group of people that included Jim Palmers and his brother played in competitive disc golf since August of 1970.

It included weekly league play and tournaments. By 1973, they promoted two City of Rochester Disc Frisbee Championships in which disc golf was the main event. These disc sports pioneers were unaware of each other and the disc golf courses they supported until several years later.

The first players’ association, introduced in 1976, provided the standardized disc golf target. While Ed Headrick of Wham-O was not the first person to play disc golf or promote competition, he was among the most significant figures in the history of modern disc golf.

Early Frisbee golf courses were ‘object courses’ that used targets consisting of such things as fire hydrants, pipes, chicken wire baskets, light poles, trash cans, or trees. The feeling of control and flight mastered with a Frisbee captivated Ed Headrick. He saw the potential for the disc beyond what anyone imagined or envisioned.

Headrick designed and patented today’s modern Frisbee. Ed designed and installed the original target course in what is now Hahamongna Watershed Park in La Canada Flintridge. The name of the park was Oak Grove Park at the time. He was the founder of the International Frisbee Association. He coined and trademarked the ‘Disc Golf’ term when he formalized the sport and received a Disc Pole Hole patent. It was the first pole to incorporate a basket and chains. He abandoned his ‘Disc Golf’ trademark and handed control and administration to the growing PDGA body of disc golf players. He grew to regret that decision.

Competitions in the U.S. and Canada

National disc golf competitions in Canada began with object courses in the mid-70s in Vancouver and Toronto Open Frisbee Championships. Wham-O’s $50,000 Disc Golf Tournament, in 1979, was a turning point for disc golf. The tournament was in Huntington Beach, California.

The cash involved was a groundbreaking factor, with the massive payout mentioned in the title. Competitors who qualified received invitations. There were 72 qualifying events established around the country. They brought the best disc golfers from the U.S. The installation of the first 18 Disc Pole Hole course was in Canada on Toronto Island in 1980. In 1982, Ted Smethers was in charge of the PDGA. It ran independently and officiated the standard rules for playing the sport.

When Ed Headrick died in 2002, per his wishes, a limited number of discs were incorporated with his ashes and given to family and friends. Some remain. The proceeds for the sale of these discs go toward funding the ‘Steady’ Ed Memorial Disc Golf Museum in Columbia County Georgia’s International Disc Golf Center.

The Future of Disc Golf

Millions of people enjoy destroying discs as they play disc golf. They want to play the game, not become directors of a worldwide organization. That is problematic. We could be on the verge of exponential growth in the sport. Sophisticated management with business capabilities and ideas is needed. As with the Frisbee and Super Ball for instance, without thinking big, nothing big occurs. Ed Headrick found out turning the sport over to the players was not a great marketing plan.

Before he died, Ed Headrick wrote about his 33 years of experience. To realize his dream of finding peach through communicating with chains and a piece of plastic will not be accomplished without people who know how to promote it. They don’t have to understand the sport. Discover how Wild Discs was founded here!